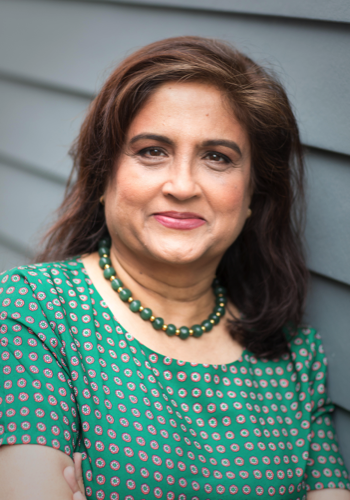 Shabnam Samuel is an author and a motivational speaker and heads an Enterprise called Social Lite House, LLC, based out of Washington DC. Through SLH LLC, we reach out to the underprivileged, just not in economic spheres but also to those women, whose voices have been silenced.

Shabnam is an award winning author of her memoir called A Fractured Life, which was published in the USA in 2018. At the age of 57, after decades of silence, Shabnam found her voice and her strength through the writing of her book.  Today, Shabnam reaches out through her talks, seminars and workshops to those women who need to come out of their own shadows and find themselves.

Shabnam is also the founder of the Panchgani Writers’ Retreat (www.panchganiwritersretreat.com ) an international writing retreat based out of Panchgani, India. The retreat incorporates mindful living along with creativity and wellness following Ayurveda principles, with yoga, meditation and writing workshops.

Shabnam is studying to be an Ayurveda practitioner at the Kerala Ayurveda Academy in Kerala, India.

Shabnam hosts a local TV show called Dew Drops and Words that broadcasts to 6.1 million viewers on the WJAL LATV network in the Washington DC area. You can find her on YouTube under the name “Dew Drops and Words”

When she is not doing any of the above you can find her cycling somewhere in the suburbs of Washington DC which she has called home for the last 34 years.