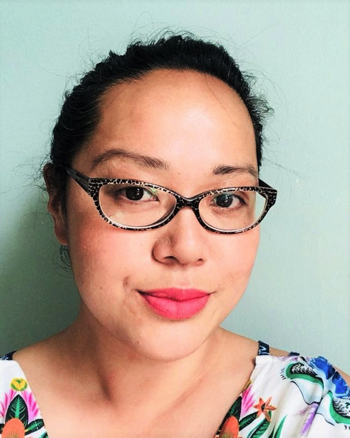 Maisie Chan is children’s author and screenwriter. Her debut middle grade novel Danny Chung Does Not Do Maths (Bonnier Books, U.K.) a.k.a Danny Chung Sums It Up with (Abrams Kids, U.S) won the Jhalak Children’s and Y.A prize 2022 and the Branford Boase Award 2022. It was shortlisted for numerous other awards, notably the Diverse Book Awards and Blue Peter Book Awards 2022. Maisie’s second novel Keep Dancing, Lizzie Chu is out with Piccadilly Press and will be out with Amulet Books in March 2022. She also writes the Tiger Warrior series for younger readers (Hachette). She has written early readers (Hachette and Collins) and had short stories published in various books such Bedtime Stories: Amazing Asian Tales from the Past (Scholastic), The Very Merry Murder Club(Farshore/Harper Collins), Ladybird Tales of Superheroes (Penguin) and Stories from Around the World (Scholastic). She started the group Bubble Tea Writers to support and encourage new British East and Southeast Asian writers in the UK and has mentored for Megaphone and Diverse Voices, Inc. She currently lives in Glasgow.

Xuanzang in Bedtime Stories: Amazing Asian Tales from the Past (Scholastic, 2022)

It Takes a Thief to Catch a Thief in The Very Merry Murder Club (Farshore/Harper Collins, 2021)

Danny Chung Does Not Do Maths (Piccadilly Press, 2021)

Stories From Around the World (Scholastic, 2020)