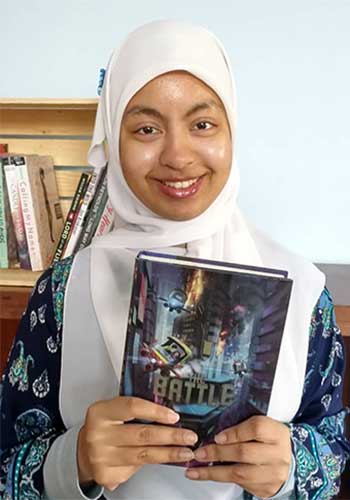 Karuna Riazi is a born and raised New Yorker, with a loving, large extended family and the rather trying experience of being the eldest sibling in her particular clan. She holds a BA in English Literature from Hofstra University, and is an online diversity advocate, blogger, and educator. She is a 2017 honoree on NBC Asian America’s Redefining A-Z list, featuring up and coming talent within the Asian-American and Pacific Islander community, and her work has been featured on Entertainment Weekly, Amy Poehler’s Smart Girls, Book Riot and Teen Vogue, among others.

Karuna is fond of tea, Korean dramas, writing about tough girls forging their own paths toward their destinies, and baking new delectable treats for friends and family to relish. The Gauntlet (S&S/Salaam Reads, March 28, 2017) is her middle grade debut, with a forthcoming companion, The Battle. She has also adapted The Jungle Book for the Apple TV series Ghostwriter (Sourcebooks/Sesame Workshop, 2019).