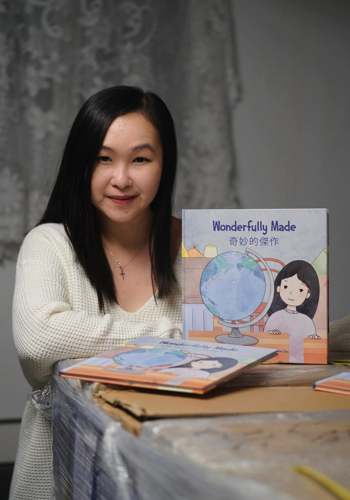 Esther Leung-Kong is the author of the bilingual children’s book Wonderfully Made 奇妙的傑作. She was born in Hong Kong and immigrated to Turtle Island (Vancouver, Canada) when she was 9 years old. Growing up as a third culture kid, she moved several times internationally. As a bicultural adult, she writes, speaks, plays music and sings in both Chinese and English.

Esther’s passion includes advocating for justice & compassion both locally and globally for the Kingdom, leadership development for young people and inspiring others through music.

Since 1998, Esther has been serving alongside and building relationships with families in the Indigenous community in Vancouver. She has been raising awareness among the Chinese immigrant community about the colonial history and treatment of Indigenous people especially the Indian Residential School System .

Since 2006, Esther has been working in the non-profit organization Culture Regeneration Research Society (CRRS); currently, she is the Outreach Ministry Manager. Under CRRS, she started Project Shine in 2008 where she trains and leads teams of young people from North America on volunteer trips to teach English in rural China to underprivileged students. Esther often refers to Project Shine as her first baby until she gave birth to twins and then her 3rd child later on.